Posted on 27 April 2017 by jillesvandenbeukel

And here we face a dilemma. The oil market is a global market. But accurate and up-to-date estimates of oil inventories are only available for the US. After the first oil crisis the US government established the EIA and its weekly reports are closely watched by traders across the world. The IEA reports for other OECD countries are published on a monthly basis and are less accurate. Even less accurate are the estimates for non-OECD countries (countries that often regard these data as confidential).

How to reconcile the high OPEC compliance to the agreed cuts with these record high levels of US inventories? 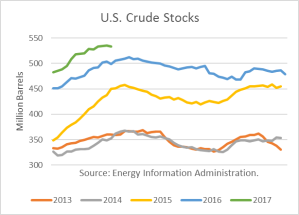 are trying to get a better picture of worldwide oil inventories and transports. On the basis of data from one of these companies (Vortexa), the Financial Times reported that the total amount of oil in supertankers (both stored and in transport) had diminished by 16 percent since the beginning of the year.

According to Bloomberg, oil stocks in the Caribbean have diminished by about 10 percent since February. The picture that emerges is one where oil from poorly (or not at all) reported stocks in producing countries, supertankers and from more remote locations (Caribbean, South Africa) has now started to move to major refinery centers (where they are accurately reported).

It seems the OPEC cuts are now starting to influence global oil stocks. Influencing the most visible and accurate US stocks (which have the largest bearing on oil prices) takes longer.

Within OPEC, compliance to the agreed cuts has reached levels close to 100 %. For the non-OPEC countries contributing, compliance has reached about 60 -70 %. Even Russia is sticking to the deal (not that much of an achievement given that Russian production tends to fall at the end of the winter).

As a result the IEA now expects global supply to fall below demand  by about 1 mb/d in Q2 (assuming a continuation of the current measures). 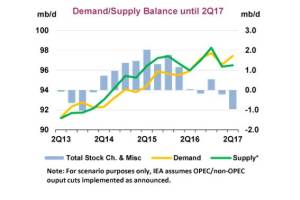 OPEC will continue its current cuts

In my view the high US stocks have been masking falling global stocks. Large US storage facilities are efficient and low cost (and not the first locations where one takes oil out of storage). Non-OPEC supply outside the US is now falling, whereas US supply is rising.

The following appears to be the most probable scenario for the coming time:

From every nook and cranny oil is now coming out of storage. That implies that rebalancing of the oil market takes longer. But it does not imply that it will not happen.