US shale oil: limits to growth

Posted on 30 October 2017 by jillesvandenbeukel

US shale oil has had a major influence on oil markets. Looming oversupply due to the rapid growth of US shale oil production was the primary cause for the 2014 oil price drop (triggered by OPEC’s decision to not cut back production at the time).

Once that the oil market had found a new equilibrium, the oil price has moved within a relatively narrow range: the “shale band”. The rapid response of US shale production to changes in the oil price has resulted in a range of about 45 to 55 dollar per barrel (WTI). It is the price range in which US shale currently can operate without flooding the markets or going bust, close to the current average break-even cost of US shale.

Many analysts expect US shale to continue to limit oil price volatility – at least in the short term. But a key question here is: how fast can US shale grow? US shale is not a swing producer like Saudi Arabia that, with a spare capacity of about 2 mb/d, can open up the tabs within a matter of weeks.

Since 2014 investments in conventional oil have been significantly reduced. Yearly decline rates of existing fields have increased and a smaller number of new developments have been sanctioned. It will take until 2020, however, before the effects of this will be felt in full.

Over the coming years we will be carrying out an experiment: how long can US shale production continue to grow at a rate of about 0.5 – 1.0 mb/d (depending on oil prices)? If oil demand continues to increase at its current rate we should at some stage reach a point where a further decrease (or sluggish growth) in conventional oil and a reduced growth potential of US shale oil results in an upward pressure on prices. Many analysts expect this point to be reached in the early 2020’s. A key question here is: how far can US shale grow?

Compared to conventional oil US shale is more similar to a manufacturing industry with a higher degree of standardisation. Limits to the production of US shale come from the availability of finance, drilling rigs, fracking crews or pipeline capacity. Geology gives limits to its production as well but not so much by oil in place (which, for all practical purposes, is unlimited) but by the extent of sweet spots; those places where the recovery per well is highest and the main (if not only) areas where production can be commercially attractive.

Labour shortage currently limits the rate at which US shale production can grow. This shortage is most acute in the Permian in West Texas.

During the 2015/2016 downturn oil producers and service companies cut over 100,000 jobs in Texas alone. Currently about 30,000 people have been hired again. That number could have been higher, however, would many people not have left this boom-and-bust industry in search of more job security.

Shortages are most pronounced for truck drivers and fracking crews. Combined with a shortage in fracking equipment (across the US only 12 million hydraulic horsepower is currently available with demand for about 16 million) this is now responsible for an increase in DUC (drilled and uncompleted) wells.

Shortages of labour and equipment have so far resulted in a 15 to 25 % cost rise for oil field services in the Permian.

Injection of produced water in salt water disposal wells is a significant part of operating expenses. Unlike conventional oil, water cannot be re-injected into the reservoir the oil/water was produced from.

Again, the issue is most pronounced in the Permian where over 5 barrels of water are produced are produced for every barrel of oil. After a period of low activity, the industry is now catching up on water infrastructure (pipelines and disposal wells) in this area.

Although not a show stopper, rising utilization rates of disposal wells are now starting to result in higher costs (e.g. due to longer distances over which water needs to be trucked to disposal wells with more remaining capacity).

Induced seismicity due to water disposal is now rapidly increasing in the Eagle Ford and Permian; a trend that will in all likelihood continue over the coming years. Again this is likely to lead to higher costs as the capacity of some water disposal wells will in future be restricted in order to reduce induced seismicity.

Rig productivity (defined as the average monthly contribution from a rig to production from new wells) has stopped rising. Four out of the five regions that the EIA reports on saw a decrease in rig productivity over the last 12 months.

It should be noted here that the rig count (the number of active rigs) influences rig productivity as well. A low rig count tends to give somewhat higher productivity as in general only the most efficient rigs are kept on during a downturn.

Up until 2014 rising productivity was primarily structural. Faster drilling, larger fracks and a better delineation of sweet spots all contributed. From 2014 until 2016 low oil prices resulted in further productivity rises that had a greater cyclical component. Only the best performing rigs were kept active and remaining drilling focused on the very best part of the sweet spots (“high grading”). Throughout the years the increase in initial rates has been more pronounced than the increase in estimates of total well production (newer wells tend to decline faster).

US shale has made it possible for Wall Street and private equity to rapidly invest large sums of money in the oil industry. Conventional oil offered less opportunities for this (the number of conventional oil discoveries being limited).

What is now becoming more doubtful is whether a production growth success story will be followed by a financial success story. So far US shale producers have been characterised by a negative cash flow. As a result the cost of finance has gradually increased. Whether a company’s licenses are located in the very best parts of the sweet spots (on which the industry has gradually increased its focus) primarily determines break even costs and profitability (or rather: the extent of losses incurred).

Investing in US shale has so far implied banking on future profitability (by higher oil prices or future cost decreases by further technological progress). In a world of higher oil prices and oil demand growth the relatively low break even costs of US shale for non-OPEC new oil should indeed give it an advantageous position. 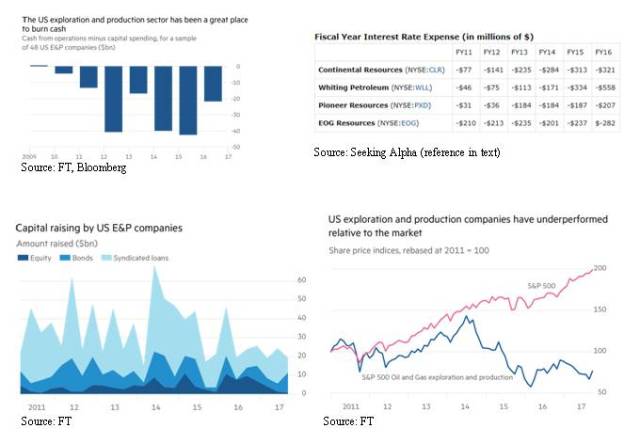 Over the last few months investors have become more reluctant to provide additional finance to US shale. A number of factors play a role here: the continuous negative cash burn, the limited upside potential for oil prices in the short term and increasing doubts on the long term ability of the industry to further increase well productivity. Market psychology, still positive in the immediate aftermath of the December 2016 OPEC cuts, has now become more negative. The increased potential for rising interest rates (which – should it materialise – will be a severe problem for the industry given its high gearing) has also played a role here.

Maps of the main US shale regions give an impression of extensive areas. The actual extent of the sweet spots (where the bulk of the production is coming from) is much smaller, however. The vast majority of tight oil production comes a limited number of counties only (Dunn, McKenzie, Mountrail, Williams counties for the Bakken; Karnes countie for the Eagle Ford).

The limited growth of production in the Bakken and Eagle Ford in recent years is related to the limited size of the best areas. In the Bakken, there is hardly any scope for further infill drilling in the very best Parsnell area (EOG operated). New wells have been finding slightly lower pressures and associated higher initial Gas Oil ratios (see figure below). For the Eagle Ford, the size of the sweet spots turned out to be smaller than expected. As a result, companies have, over the last 2 years, shifted resources from the Bakken and Eagle Ford to the Permian.

In contrast to the Bakken and Eagle Ford there is still ample scope in the Permian to drill new wells in sweet spots at the original spacing rather than drilling infill wells. The Permian is a larger and more complex shale oil area and production comes from different stratigraphic intervals. With the increased focus of shale oil companies it has over the last 2 years been the area with the largest production growth. Even here, however, limits to growth now start to appear on the horizon.

Over the coming years (mostly from 2020 onwards), an increasing amount of Permian wells will be infill wells at half the original spacing. A recent study by Wood Mackenzie (based on a number of technical papers at industry conferences) estimates that recovery factors for these infill wells will be 20-40% lower (due to e.g., frac hits, lower pressures and resulting higher gas oil ratios). Operators will face a choice whether to drill infill wells in the sweet spots or to drill wells with larger spacing outside the sweet spots. To what extent this will be countered by further technological advances is still unclear. In terms of maturity of the play and overall shape of the production profile the Permian lags the Bakken and the Eagle Ford by about 5 years. All the different Woodmac scenarios show a marked reduction of production growth from the Permian in the early 2020’s, however.

There is no single factor that gives a hard upper boundary for the rate at which US shale can grow and the production level that it can eventually reach. Together with the oil price it is the interplay between financial, technical and geological limits that will eventually determine this.

With the rate at which technology progresses slowing down and having reached (Bakken, Eagle Ford) or approaching (Permian) the point that well interference is starting to reduce well recoveries in earnest financiers are becoming more reluctant to provide additional funding to US shale.

As a result estimates of future US tight oil production are becoming more conservative. Whilst acknowledging that future technological progress creates a large uncertainty the prospect of US tight oil production leveling off in the early 2020’s has become a likely scenario (see also the figure below). By that time, the ability of US shale to rapidly grow and provide a ceiling on oil prices is likely to have been significantly diminished. 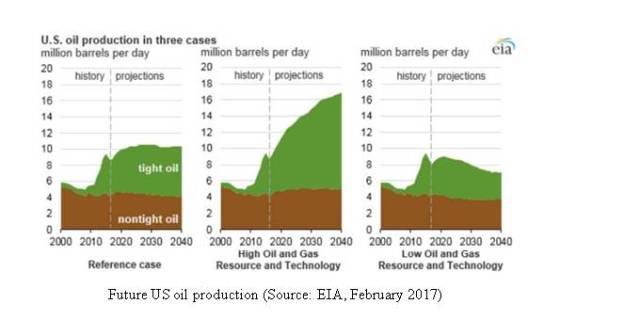